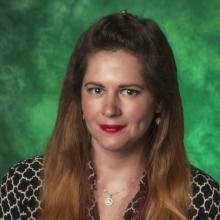 Kathryn Conrad serves as Study Abroad Assistant Director. In addition, she is responsible for faculty-led study abroad programs around the world.  She is a Texas native from San Antonio, but was raised around the country (and outside it) due to her father’s job with the Air Force.  For 11 years, Kathryn lived and worked in the Middle East, even completing her Master's in International and Public Law abroad. As an undergrad at Miami University of Ohio, she studied abroad three times in Europe and completed an internship in Istanbul, Turkey. These transformative experiences paved her way to the field of international education, where she has continued to grow professionally for the past 11 years. Much of Kathryn’s previous experience has been working for the Education Abroad team at Amideast, an American NGO, with her most recent role with the organization being the Director of Education Abroad and Scholarships for Amideast’s field office located in the Sultanate of Oman.

Kathryn holds a Bachelor of Arts degree in Diplomacy & Foreign Affairs and French from Miami University of Ohio. She also holds a Master of International & Public Law degree (M2) from l’Université Paris Descartes (Paris V), and she recently completed a Master of Public Administration degree at the University of North Texas.

Fun Fact: Kathryn has traveled to 40 countries! Her favorite countries to visit are Turkey, the Sultanate of Oman, Thailand, Nepal, and Croatia!